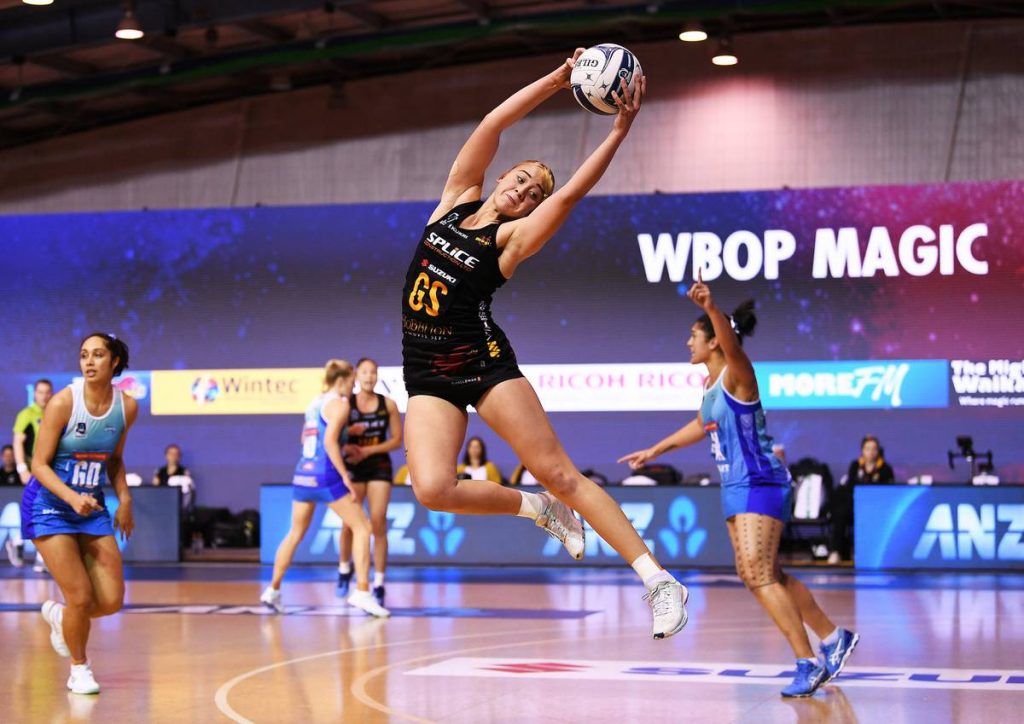 ROUND 7 of the ANZ Premiership saw some blowout performances and some surprise wins with the Steel toppling the second placed Mystics in a strong showing. The Tactix took their game to the next level while the Pulse kept their winning run intact.

Pulse are the team to beat
The reigning premiers continue to go from strength to strength with Round 7 no exception, going on a rampage against Waikato Bay of Plenty Magic to record a 23 goal win. They dominated from start to finish with their clean ball movement and accuracy to post framing up to the favourites for the premiership. Goalers Aliyah Dunn and Ameliaranne Ekenasio led the way with a combined 47 goals from 49 attempts highlighting their prowess in the goal circle. The Pulse simply outclassed the Magic at every turn with their full court press and ability to bring on bench players to inflict the same pain. Their dominance did not stop there with the Pulse also downing the Stars by 10 goals showcasing their competitive edge and winning ways. Kelly Jury starred in her side’s victory over the Stars racking up a whopping four gains from one intercept, six deflections and two rebounds while Katrina Rore’s influence did not go unnoticed with the goal defence collecting three gains, one intercept, two deflections and three pickups.

Super-sub Ellen Halpenny
No matter the time or situation, the injection of Ellen Halpenny pays dividends for the Steel with the cool, calm and collected goaler owning the circle. Halpenny once again proved to be the difference for the Steel, taking ownership and demanding the ball while also showcasing her array of tricks to drag and drop and receive the ball along the baseline. Her effortless movement in the circle makes it easy for Gina Crampton and Shannon Saunders to spot her and subsequently feed into her. Up against both Sulu Fitzpatrick and Phoenix Karaka, Halpenny held her own and led from the front converting 15 goals from 20 and while she was not overly accurate sitting at 75 per cent it was her work and adaptability in the attacking third that allowed her side to settle when the pressure was on.

Khiarna Williams is an exciting prospect for the Magic
Although only 17, Magic goal shooter Khiarna Williams really announced herself as a serious competitor taking everything in her stride and coming out with a real presence. Not the tallest of shooters, Williams got to work with her nimble footwork and spatial awareness to glide in and out of the circle. Working her way into the match after being injected in the third quarter against the Pulse, Williams took a while to find her feet and while not overly accurate showed plenty of promise with 12 goals from 17 attempts at 71 per cent. She got the start for the first time this season against the Mystics with the youngster taking it up to Fitzpatrick and giving the experienced goal keeper something to think about with her strong hands and willingness to go to post, slotting 10 goals from 13. Her connection with Abigail Latu-Meafou and midcourters Whitney Souness and Sam Winders steadily improved throughout the match giving the Magic plenty of hope for future games.

Accuracy masterclass in the circle
Round 7 proved to be a field day for the goal shooters with Mainland Tactix goaler Ellie Bird sitting at 100 per cent nailing an impressive 37 goals to lead her side to victory. Although no other player managed to record an unblemished shooting record Grace Nweke came close in her match against the Steel with 32 goals from 33 attempts while Dunn also only missed the one goal in her first outing with 19 from 20 attempts. For the Northern Stars the output of Maia Wilson at the post was impressive with the goaler carrying the load in both matches with a combined 61 goals from 71 attempts.

Mainland Tactix should not be underestimated
The Tactix showed exactly what they can do when all of the pieces of the puzzle fall into place and the attack, midcourt and defensive units firing on all cylinders. With the likes of Jane Watson and Temalisi Fakahokotau renowned for their ability to turn over possession, the attack kicked it up a gear going at 96 per cent shooting accuracy thanks to Bird and Te Paea Selby-Rickit. The two combined seamlessly able to rotate around the circle edge and shoot from range while Watson and Fakahokotau continued their merry way with a collective nine gains made up of 10 deflections, six pickups and five rebounds. The youthful midcourt of Kimiora Poi, Erikana Pedersen and Charlotte Elley all stood up using their speed and class ball movement to keep their opposition at bay.