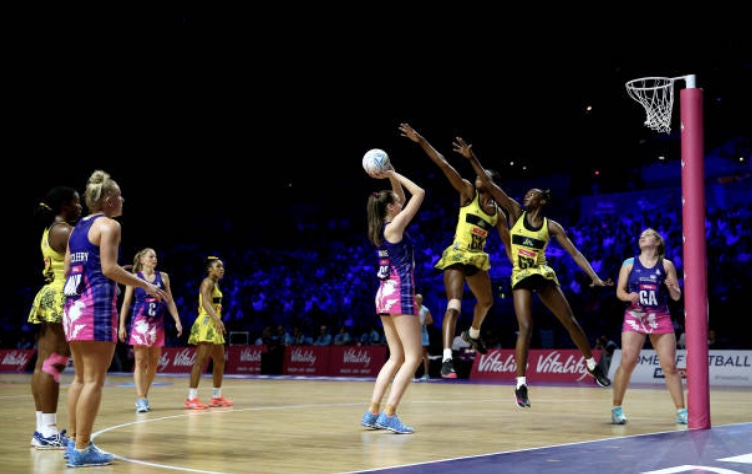 WITH a number of big names taking part in the 2019 Vitality Netball World Cup, the news of a 17 year old playing at the highest international level brought plenty of attention to the Scottish Thistles.

At only 17 years old, Scotland’s Emma Barrie was the youngest competitor in the 2019 Netball World Cup. Standing at 1.94m tall, Barrie seemed unfazed as she took on some of the biggest netball stars in the world in front of a massive audience across the globe. While her youth was a big talking point across the competition, her skill and footwork to find the post with ease proved she could walk the walk.

Barrie started playing netball as a nine year old, playing at junior level with friends before being put forward to her district side in high school. She was only 14 when discovered by Scotland Thistles captain Claire Maxwell before working her way through the pathways, playing for the Thistles at both Under 17 and Under 21 level before her senior debut on the world stage at the Netball World Cup.

“My friends and I went to a Thistles camp when I was 14 being led by Claire Maxwell where she spotted me … at this time I was playing goal keeper but she was adamant that I was a goal shooter, she then put me forward for Under 17 trials and I just worked my way up the age groups.”

What Barrie may lack in experience she more than makes up in talent, pushing to be her best at every turn and consistently improving when given the opportunity. Barrie had her chance to get a starting position for the Strathclyde Sirens in the 2019 Vitality Netball Superleague, stepping into the side with big shoes to fill after New Zealand shooter, Cat Tuivaiti retired midway through the season. While only playing a few matches toward the end of the season, taking the court against the calibre of players ahead of her first World Cup was instrumental in her selection for the Thistles side.

Barrie took the Superleague competition in her stride, enjoying the fierce challenge and showing that Scotland has some young guns coming up through the ranks. Though the jump from Superleague to international was big, Barrie was more than up to the job and relished playing at a high level on familiar soil.

“Playing for your country in the World Cup is completely different than playing in the Superleague, it’s just a different atmosphere and the standard of netball is different with all the different countries’ styles of play,” she said. “Playing my first World Cup and also earning my first senior cap was an amazing experience especially playing in front of a crowd who created a great atmosphere, and the support from our Scotland fans who had travelled down to cheer us on made it even better.”

“While playing games was obviously one of the best parts it was also exciting to see just how many netball fans had travelled from all around the world to come to the World Cup to support their teams,” she said.

While representing Scotland was a highlight in her career so far, Barrie said the experience will ultimately help her become a better netballer in the coming years, with improving her craft at the top of her list despite already reaching the highest level in Scotland.

“It’s amazing to be able to represent my country at the pinnacle event of our sport where only the best netballers compete. Being able to play against them is a great experience and will help me improve in the future.”

The 17 year old all but proved her worth in the Thistles side, shooting 112 goals and using her height to her advantage to pluck passes from the air and find plenty of space to shoot from range against a number of high-flying opponents. Among them were England goal keeper Geva Mentor and Jamaican star, Shamera Sterling.

“I played against many physical defenders but my toughest opponent was definitely Shamera Sterling, with her ability to contest high ball and confuse the space,” she said. “I did enjoy playing against tough physical defenders as it allowed me to compare myself to some of the best defenders. I would like to play them again in the future to see how much I have improved.”

As for the future of her netball journey, Barrie is excited and looking forward to honing her shooting craft as she continues to grow.

“I am looking forward to traveling the world with netball in the future. So far I have already managed to visit places such as Botswana and New Zealand so I would like to see where else it can take me.”